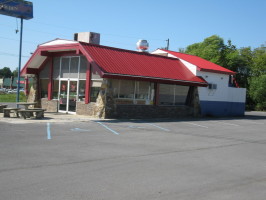 Sorry, but I just have to jump in here now with a great announcement - notice on the right is our new commercially bottled bottle of Midas Chicken Sauce. It came in this past Wednesday and today, Saturday the 13th of December over half of the nearly seventy cases we ordered has been sold. We just did not estimate the huge demand for this good stuff. We ordered more, but it will be late December or early January before more arrives. You can get yours now at Midas Burger, Fine Things and Generation Footwear in Arab (while it lasts).

Thanks for all your great support getting this project started. We appreciate you more than you will ever know.

Plenty of Midas Chicken Sauce is on hand at Midas Burger or go to any of the stores carrying our sauce - check WWW.MidasBrandFoods.com for a complete list of these places.

The good news is we should have another supply delivered sometime in the month of May. It will be sold at Warehouse Grocery in Arab and Cullman, Foodland in Arab and Cullman, Piggly Wiggly in Guntersville, Bobby's Meat Market in Arab, Fine Things and Generation Footwear in Arab among other places.

1 April 2017 - Boy, have we been having trouble getting our famous Midas Burger Chicken sauce bottled. It is first one thing and then another, but we have a 'prospect' bottler out of Mississippi that we are hoping will be able to bottle our sauce. Keep your fingers crossed.

14 May 2018 - You would not think getting something as simple as bottled chicken sauce would be such a problem - obviously, it is. Just recently the latest bottling company sent us a sample run for our taste test. It was not exactly correct, we are now waiting for their next run to see if it tastes correct. Keep your fingers crossed, we may have some bottled sauce in the near future.

"CHICKEN WITH THE GOLDEN TASTE"

Midas Burger, 256-586-3275, has been in business for over 50 years and is one of the top places to eat in Arab, AL or around the south for that matter - just ask our regular customers. Try us one time and I guarantee you will become one of our regular customers also. A couple of years back Midas Burger won the 'Best Sandwich in Arab' award given out by a local radio station. Votes were compiled by write-ins. We are located on the By-Pass on US 231, next to Joe V. Clayton Chevrolet and north of the Foodland shopping center. Our address is 221 N. Brindlee Mt Pkwy, Arab, AL 35016. Tele: 256-586-3275

We have one small problem: most people would refer to us as 'Fast Food'. Sorry, as our 'regular customers' would tell we are not 'Fast Food'. Sometimes, you have to wait.

You see, we prepare each and every order at the time you order. Nothing is prepared for you ahead of time. We want it fresh, and we know that is the way you want it too...so we can only cook chicken so many pieces at a time and we get behind. We apologize...but the wait is worth it.  It must be...because our 'regular customers' return time and time again. And we do so appreciate it.

The secret is in the preparation - each fresh, never frozen piece of skinless, boneless chicken breast is hand battered with our own special herbs and spices.

A word - we DO NOT cook our food in GREASE or animal FATS - we use PEANUT OIL. It gives the chicken, we think, a better flavor but this is a note of WARNING to those of you that might have a PEANUT ALLERGY. We use peanut oil ALL the time on every food that is deep-fat fried. This includes french fries, hot dogs, and onion rings. Hamburgers are cooked on a grill, but that's not to say some peanut oil might be around. Just be warned if allergic.

Once cooked to a rich, golden brown we top our chicken sandwiches with our own copyrighted 'Midas Sauce'. Many have tried to copy or duplicate it and they get close. They may look the same but taste them side by side, just like Coke and Pepsi did, and you'll easily see the difference. Our sauce stands head and shoulders above the 'want-a-bes'. The sauce recipe is never written down, we refer to it as the 'Secret Sauce' and only four people know how to exactly proportion and mix the ingredients: Barbara and Larry and Larry's sister and brother-in-law.

Barbara and Larry bought the Midas Burger over twenty-seven years ago.

Everyone asks, "why Midas Burger?" We toyed with changing the name to "Midas Chicken" when we bought the business, back those twenty + years ago, but the name "Midas Burger" has been around a very, very long time and part of our tradition is, even tho' the name is "Burger", all our customers know it's really chicken! So we left the name "Midas Burger". Even though maybe 90% of our business is chicken, so, why fix it if it ain't broke, huh?

We are locally owned and operated by Arab natives Larry and Barbara Hunt. Both graduates of Arab High School. Larry graduated from Athens State University with a BS in Business. Larry worked for the Army at Redstone Arsenal and retired, Barbara worked for Chrysler Corp., in Huntsville and is also retired.

Daughter Kristy is married to Mike Thomas. Both Mike and Kristy graduated from Arab High School too and currently live here in Arab. Mike attended Auburn and graduated with a degree in Engineering and works in Huntsville and Kristy also attended Auburn but obtained her BA degree in Education from the University of Alabama Huntsville and her masters from the University of Alabama. She is a now a retired teacher from the Arab Elementary School.

Grandson Payton graduated from Arab High and grand-daughter Livie is a Freshman at the University of North Alabama (UNA). The UNA awarded Payton a baseball and academic scholarship beginning his freshman year of 2013.  (P.S. Additional Note): Payton graduated 12 May 2018!!

Payton was a catcher and pitcher for the Arab Varsity baseball team and Livie was on the Cheerleading Squad for four years and was selected an All-American.

Payton played summer baseball with RSA Phoenix and Fall Ball with the University of Alabama Birmingham (UAB) Fall League. He was selected, and played, in the all-star North-South baseball game at Troy, AL in the summer of 2012 and was selected and played in the UAB All-Star game in Birmingham, AL.

Hours We Are Open

Notice: In the winter, the lobby will close at 6:30 pm, but the drive-thru will remain open until 7:00

Closed Sundays and most major holidays.

Days We Are Open

Always closed on Sundays and most major holidays.