Midas Burger has received widespread attention from customers and food critics alike. We have compiled a selection of testimonials and critical reviews for you here.

Herman Moore in his book "Eating Out in Alabama", Published by Title Publishers, Birmingham, AL on page 11 states:

"The Midas Burger on Highway 231 in Arab, Alabama is a burger shop that has gained the reputation for frying up the best fried chicken in North Alabama.

What do you do when you own and operate a hamburger shop, and are looking for a new and different food item?  You invent the chicken finger, fry it in a delicate batter with a dozen herbs and spices and call it Cran's Chicken Fingers.  This is exactally what Cran did years ago, and today "Chicken Fried with the Golden Taste" is a household word through out the mountain lakes of North Alabama.

If you really put your mind to it, I'll bet you can come up with a dozen golden reasons to stop by the Midas Burger soon!! 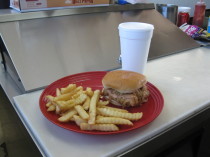 If you love chicken sandwiches, this it the place to go. Take some home - they only have 4 tables. This is the best chicken sandwich ever. The cows can't compare on the best of days, as good as they cook.﻿

What users are saying:

Write a Review
Reviews from:

I just wanted to brag on Midas Burger! We decided to ask if they would take a large order and deliver it to the school. They have been so easy to work with and very polite! I am not sure who I have spoken with on the phone, but please send my happy thoughts and appreciation their way!

"Midas Burger is simply a great place to eat: the food is incredible and the service is delightful. I highly recommend it!"

"Great restaurant for lunch... by a landslide."

"One of the best places I have eaten, not just in Arab but anywhere!"

I live in New York City, but grew up in Arab, AL, and the only thing I miss about Arab, outside of my mom, is the chicken sandwich at Midas Burger! The best I've ever had, bar none.

This restaurant has been around since I was a kid, and I have not found a chicken sandwich that I liked better. They make their own sauce and it is great. It's a very small place but the food is great.

Hours We Are Open

Notice: In the winter, the lobby will close at 6:30 pm, but the drive-thru will remain open until 7:00

Closed Sundays and most major holidays.

Days We Are Open

Always closed on Sundays and most major holidays.